With over 35 species described to date, Acanthoscurria (Ausserer 1871), is a large and wide ranging genus found throughout South America. Most are from Brazil but one species (A. antillensis) is found in the West Indies. All are large, terrestrial burrowers in their natural habitat but in captivity, most will thrive without one. Good display specimens as they rarely hide themselves away, they are voracious feeders making them a welcome and interesting addition to any collection. A standard terrestrial set-up is ideal, using slightly moist substrate,  an open water dish and a cork bark or flowerpot retreat (see housing for more information). Average temperatures and humidity percentages are also recommended. All possess urticating hair and the species most commonly kept in captivity will readily use them without much provocation. Most are nervous therefore unsuitable for handling. 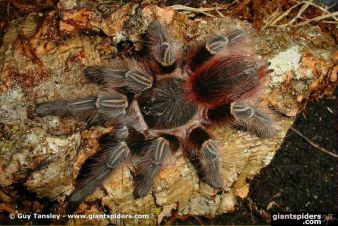 (Bolivia, Paraguay, Argentina).
Similar in colouration to L. parahybana, A. chacoana reaches a large size (some report a 7 - 8" legspan) and are voracious feeders. As a result, growth can be rapid in well fed specimens but they are rather skittish and will kick urticating hair at the slightest disturbance. Available as spiderlings in the hobby but problems have been reported with captive breeding. It seems that females may need longer to become sexually mature before becoming receptive to males and maybe only the largest females should be mated. Males are commonly attacked by unresponsive females so caution is advised if the male is to survive. 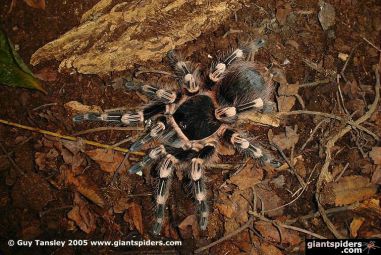 A. geniculata - (C. L. Koch, 1841) (Brazil)
A relatively new species in the hobby, A. geniculata is one of the most beautiful tarantulas available. Initially this species commanded high prices but with successful breeding (it can produce many offspring), it has become well established in captivity. Growing to a large size, similar to the largest B. smithi, and stunningly marked with black, white and some pink, A. geniculata is a must in any collection. Fairly hardy in captivity and able to withstand lower humidity than most other South American species, they are more nervous than defensive but will readily kick urticating hair at the slightest disturbance. Females are voracious feeders taking several crickets at a time and will soon have an abdomen ready to burst. Growth is rapid in the early stages, slowing as the spider matures. Males have very long legs and the carapace has a more pink colouration as do the white bands on the legs. Mating is relatively simple and the female usually remains quite calm throughout. Incubation is around 3 months with a further 5 - 6 months before spiderlings emerge. Eggsacs commonly contain several hundred young.