Symptoms: For tarantulas kept under the wrong conditions, dehydration is the most common problem. Signs of dehydration are a shrunken abdomen with a wrinkled appearance and obviously undersized. The cause of dehydration is firstly, lack of water and secondly, lack of food (essential moisture can be obtained through prey).  Too much ventilation in the spiders enclosure and not providing a water dish are the other causes. Spiders can survive surprisingly long periods without food (laboratory tests in the past relate observations of up to two years) but die quickly without water. Spiders kept in poor pet shops often display signs of dehydration but with a little attention, most spiders survive and go onto thrive.
Treatment: Offer water in a large, shallow open dish immediately. This spider will eagerly lower it's 'chest' area into the water and drink slowly for many minutes (even hours) to replace the  lost moisture from its body. The abdomen will start to show improvement after only a few hours and the spiders activity level should increase over night. Reducing ventilation in the spiders container and regular spraying to keep the substrate moist will prevent any problems in the future as well as the presence of a open water dish. 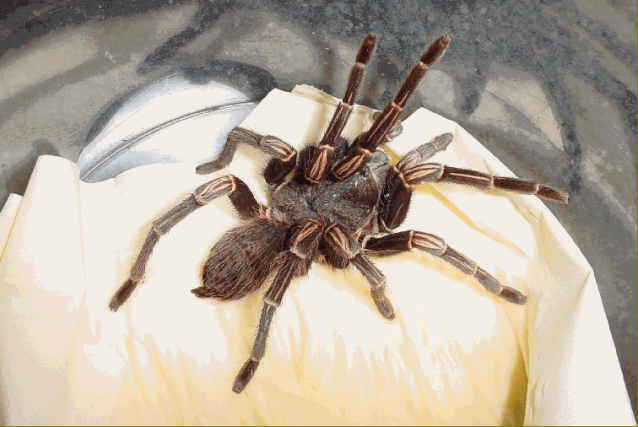 Another common problem for tarantulas is trauma caused during ecdysis (moulting). In most cases, the tarantula simply gets stuck in its old skin (exuvium). It is thought that low humidity levels can cause problems but as long as the RH is above 60%, everything should be fine. Mortality rates are higher for older specimens and if an adult spider moults irregularly then this is a sign of old age. More often than not, the spider fails to remove part or all of its appendages and becomes immobile and slowly dies. 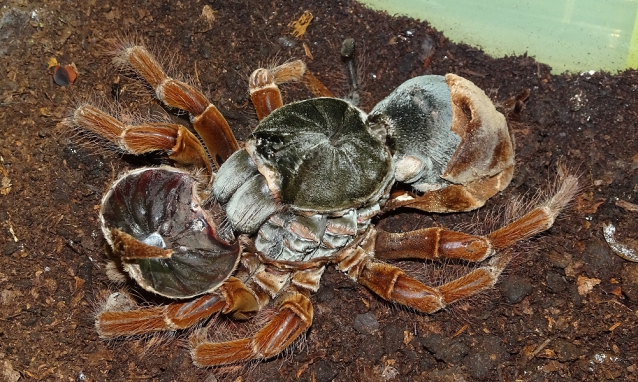 An adult female Theraphosa blondi that died stuck in a moult.

Another common problem is when uneaten prey items such as crickets are left in the cage with the moulting spider. Crickets will readily attack and bite a helpless tarantula during moulting and the result is usually death from loss of haemolymph. Most of the time treatment is impossible as when the spider is found to be having problems, the old skin is too dry to remove without damage to the spiders appendages (a normal moult should last no longer that 12 hours from the time it rolls onto its back). Nevertheless, an attempt should be made using a soft, damp paintbrush to try and gently ease away the old skin. If only one or two legs are affected then it is sometimes beneficial to remove these as they will be replaced over the next few moults. An appendage that dries deformed will almost certainly cause the spider problems with the following moult and removal prevents this. Using a pair of forceps, simply grasp the spiders trochanter as close to the body as possible and using a swift upward twist, the spider should autotomise the leg. The stump will seal itself to prevent blood loss and the new, much smaller leg will begin to form inside the coxa. Spiders that lose appendages (even fangs can be lost) will sometimes force an early moult to regain them (for example, a spider that normally moults annually will moult at around 6 months). Sometimes the old skin sticks to the abdomen and this can be removed again, by using a damp brush. Spiders that are totally stuck and beyond help should be euthenised by placing them in the freezer until dead. It is thought that sometimes a spider will moult prematurely and this is also fatal. For some reason the area around the carapace splits prematurely and the spider slowly dies as it has not made adequate preparation for the upcoming moult. Sign of a premature moult are the carapace has lifted while the spider is in the upright position (see photo below). There is usually no moulting pad present either. Premature moult spiders almost always die. 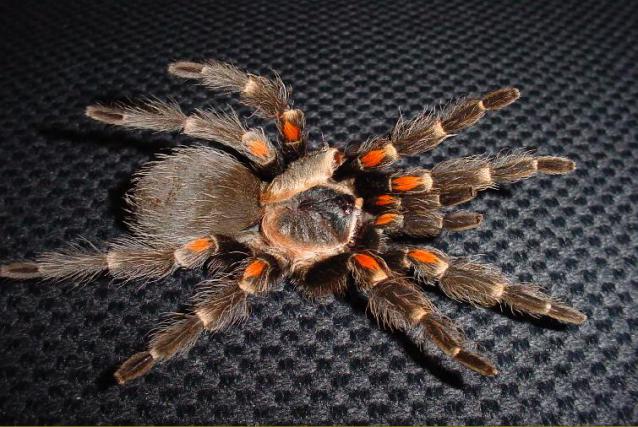 In the hot and humid environment of the typical tarantula cage, mould can and does become a common problem. Detected early enough treatment can be successful but once the mould spreads to the internal organs, it is usually fatal. Symptoms are a white or sometimes yellow plume on the spider, usually on the carapace, underside of the abdomen or at the tips of the legs. Without treatment this can spread rapidly to the internal organs, causing serious damage. Often it is more common with burrowing species from Asia (Haplopelma spp. etc) that spend most of their lives hidden from view. Kept too damp and without adequate ventilation, mould can infect the lung openings and goes unnoticed until it's too late (see photo below). Often spiders will autotomate (remove) affected appendages in an attempt to stop the spread and if this happens it may be worth inspecting the spider for further areas of infection.
Treatment: caught early enough, some mould problems can be treated successfully. First of all it is recommended that the spider is re-housed in a clean, well ventilated, dry container that contains a water dish at all times. This reduces the risk of the mould spreading and removes it from the environment where the spores are present. Recommended treatment includes applying Betadine antiseptic solution to the affected area. Betadine is readily available over the counter at most pharmacists and is a solution containing 10% iodine. Any solution used must be water based and it may take several applications for any significant results to appear. For extreme cases, some recommend immersing the whole spider in a 10% solution of alcohol but this should always be considered as a last resort. Like all tarantula ailments, mould is usually fatal as once the problem is noticed, it is usually too late for successful treatment. Prevention is always better so try and provide the ideal conditions for the species being housed. Remember that just because a certain species comes from Asia or South America that it should be kept in swamp-like conditions. Adequate ventilation is essential with all species but more so with species that require higher humidity.

Tarantula with severe book lung mould infection and after treatment with Betadine solution.

Nematode worms are microscopic non-segmented worms that occur naturally in soil all around the world. Most are harmless to your tarantula but there are some species (Tarantobelus sp.) that are major parasites in invertebrates. They transmit bacteria that is lethal to it's host and for this reason they are often used for biological insect pest control. Wild caught spiders are sometimes imported carrying these worms and if not properly dealt with, they can spread throughout a collection with devastating effects. Nematode worms penetrate their host through any small opening (usually via the book lungs or the anus. The mouth has a very efficient filter system that prevents the worms entering here). They then spread throughout the entire spider to eventually emerge through the mouth. Up until the final stages of infection, the spiders behaviour is quite normal and, unfortunately, when the symptoms are noticed, it is usually too late. Although devastating when present, nematode worms are relatively rare in collections and by taking the right precautions and procedures, you can at least limit the amount of damage they do.

Symptoms: Typical symptoms to watch out for are; restlessness, spinning unusual amounts of silk, spending long periods around the water dish, any unusual sweet odour coming from the container, a very wet sternum caused by the spider drooling (not to be confused with normal cleaning behaviour) and, most importantly, a white sticky mass around the mouth and holding the palps permanently under the chelicerae. For some reason the chelicerae become paralysed, making it impossible for the spider to clean itself and making feeding impossible. A quick test is to gently shake the spiders' container. Under normal circumstances, the spider will steady itself with all the legs and this includes placing the palps on the floor also. Infected spiders won't do this. You can also try feeding, as affected spiders cannot attack prey. If your spider accepts prey, chances are worms aren't present. Inspect new spiders carefully especially wild caught ones; paying particular attention to the underside and to be safe, any new additions should be quarantined for at least three months away from the rest of your collection (ideally in a different room). Use separate tools for these in quarantine and, if found to be infected, it is recommended that the spider be disposed of as quickly as possible by placing it into the freezer overnight. At the time of writing there is no known successful treatment for these worms but in recent years, research into this unknown area of science has increased. For example, RIESM (Research Institute for Exotic Species Microbiology) has been set up to "enumerate the normal bacterial, fungal and protozoan populations residing in and on the more popular species of Tarantulas. Incidental to this process will be the beginnings of an investigation of Tarantula infectious disease". 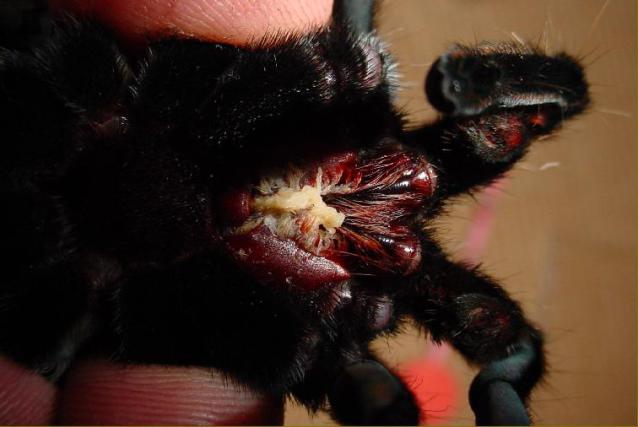 Mites will always be present in the hot and humid environment of the typical tarantula set-up. It is only when their numbers become excessive that they can become a problem. Good ventilation and good cage maintenance is essential to keep mite numbers down as they thrive on any decaying matter such as discarded prey remains. These should be removed as soon as possible to prevent build up. Eggsacs can also fall victim to mites so you have to be extra vigilant during this time, keeping the cage as clean as possible. Mites will gather around the mouth of the spider when the environment is too humid so drying out the cage for several days is recommended. The key is a good balance between required humidity and good ventilation. Spray the tarantulas cage regularly but allow it to dry out in between but be careful to provide extra humidity during pre moult. Sometimes mites can attach themselves to the spider (see photo below) and these are best removed using a cotton bud coated with petroleum jelly. Gently swab the affected areas and the mites should become attached to the cotton bud, removing them. Mites are not a major problem and with a few simple steps, you can reduce their numbers to acceptable levels. The spider in the photo below recovered fully without much intervention but, in ideal conditions, this wouldn't have happened. 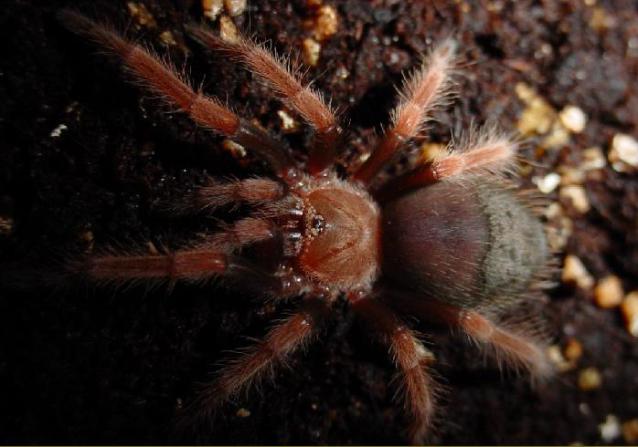 Some tarantulas show a progressively worsening blister on their abdomens the cause of which is as yet unknown. Some say it could be an abscess or tumour of some kind but further research is required. One thing is for certain, it is always eventually fatal. 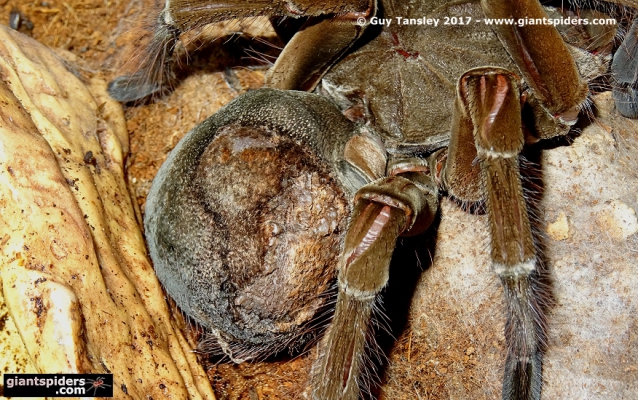 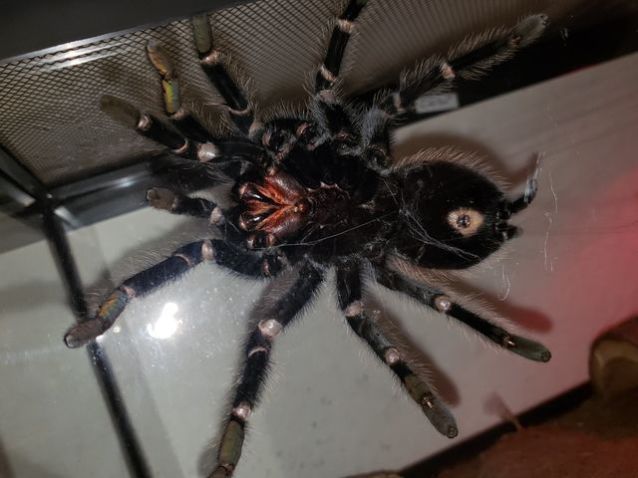