Note: the following brief description is an 'ideal situation' of how a pairing and egg sac production should go. For a more detailed account it is recommended that the reader obtain more information on the particular species to be bred.

The male.
With his maturing moult, the male goes through several physical changes (see photograph below). His legs become somewhat longer, his abdomen is smaller and in most species, he will obtain prominent hooks or spurs (tibial apophysis) on the tibia of the first pair if legs. The most important change occurs to the palps. These become more bulbous at their ends and develop the intricate secondary sex organs (embolus) used to transfer sperm to the female. 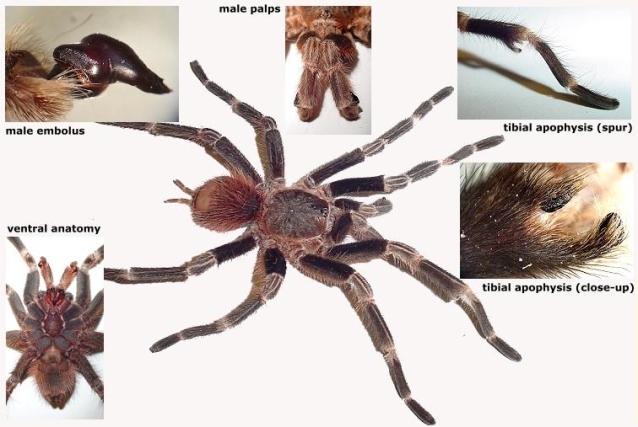 Once matured, the male should be given a week or two to recover and offered food. After this time he should start to spin a sperm web (see photograph below). This consists of a small band of thick silk open at both ends onto which the male deposits a small drop of sperm onto its underside. He then climbs on top of this web, reaches underneath and begins the process known as sperm induction. The male alternately dips his emboli (palpal bulbs) into the sperm, drawing it up until he is fully 'loaded'. He then dismantles this web and goes is search of a female. 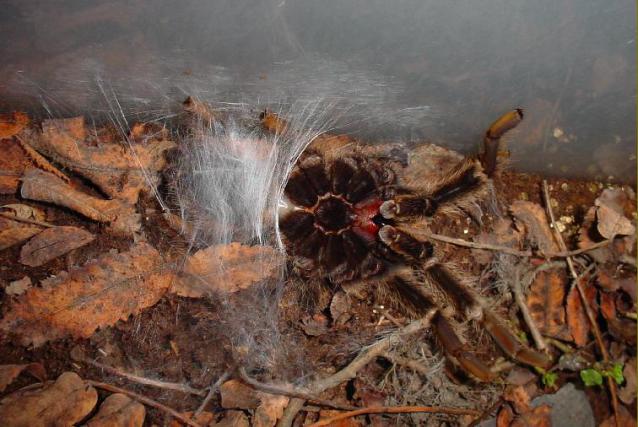 Sperm web production can take several hours and the spider should not be disturbed during this process. Make sure that there is enough room in the spiders' cage also, as restricted space will prevent this process. Males build several sperm webs throughout the course of their remaining lives but remember that the period in which a male is fertile is often as short as a few months. At the start, he may build a new sperm web every few days but this reduces as the months pass until no webs are built at all and he eventually dies of old age.

The female.
Ideally the female should also have recently moulted and offered as much food as she will take in the first few weeks. Once the female passes the six month mark in the twelve month moult cycle, most mating attempts usually fail. This is due to long time scale a tarantula needs to go through the egg production process. Female tarantulas simply reach the point of the annual moult before they are ready to lay eggs. At this point the sperm is lost (the lining of the spermathecae is shed along with the skin) and she becomes virginal again (see section on sex determination). On occasion, however, pairings after this time sometimes are successful so an attempt should be made.

Once the above criteria have been observed, the male can be introduced to the female.

The male should be introduced into the females container at the opposite end to the female and once the male touches the her web, he usually begins his courtship immediately. This consists of vibrating his whole body and tapping his palps on the substrate, all the while moving forward in search of the female. This vibration alerts the female of his presence and if she is receptive, she will respond by drumming rapidly with her legs on the cage floor. Once they meet, the male will move in to secure the females fangs with his tibial spurs and once in place, he will lift her to expose her underside (see photograph below). All the while the male continues to vibrate his body and now he begins to stroke and drum on the underside of the females abdomen and sternum. The male then inserts his palps into the females epigynum and injects his sperm. The female usually collapses backwards as the sperm is introduced and she may try to escape but she is held fast in the males grip. The male may use one or both palps alternatively at this time and when finished, he will retreat from the female and only release her when he feels safe to do so. He then makes a rapid retreat and should be removed at this time.
Several video clips of matings can be found here. 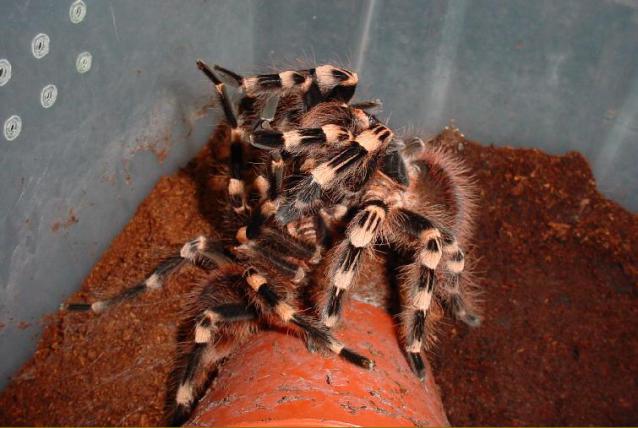 During the following weeks, the female should be well fed in preparation for egg sac production. The time between mating and egg laying varies considerably between the species from a few weeks to several months (feeding rates and temperature also have an effect on egg sac production). When the time is right, the female will start to dig up the substrate and start to lay silk around the tank walls. A suitable shelter should be made available at this time to allow her to feel safe and she will usually seal herself up inside. Over the following hours, the female will spin a dense mat of thick silk and deposit her eggs onto this, finally gathering together the sides of this mat to form a loose round ball. Over the next few months the female guards the eggs constantly, rotating them every few hours but rarely leaving them unattended. Feeding stops during this incubation period but as usual, fresh water should be made available at all times. She should be disturbed as little as possible as incubating females can be very nervous and this may cause the female to feel unsafe. This can result in her actually eating the eggs. She may do this for several reasons; the environmental conditions are not suitable (too dry or too humid etc.); or the eggs are infertile (this sometimes happens with older males). Ideally though all will be well and after a few months, the small spiderlings will start to emerge from the egg sac. They usually emerge in their nymph stage but after a few days they soon turn dark and go through their first moult and become fully mobile spiderlings. They can be left in this situation for several days to weeks but eventually the female should be removed and offered food and the spiderlings separated into individual pots. They usually start feeding in a few days and should be offered suitable prey such as fruit flies or micro crickets. 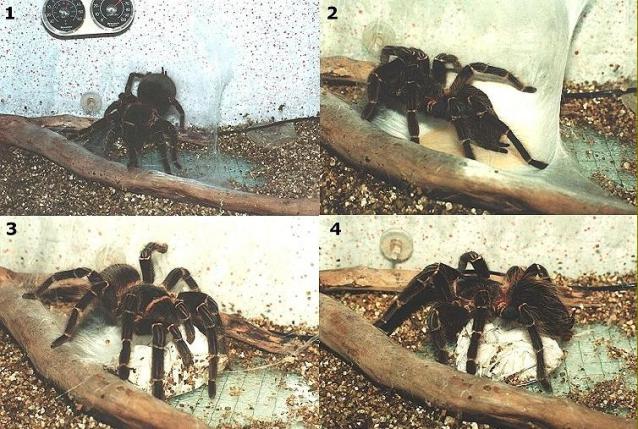 1. After choosing a suitable spot, the female starts to spin a large cup-like structure.
2. The eggs are deposited along with the stored sperm onto the thick web of the eggsac.
3. After covering the eggs with more silk, the female begins to gather the sides of the eggsac.
4. With all the sides gathered together, the female rolls the eggsac into a loose ball, adding silk and sometimes urticating hairs for protection. 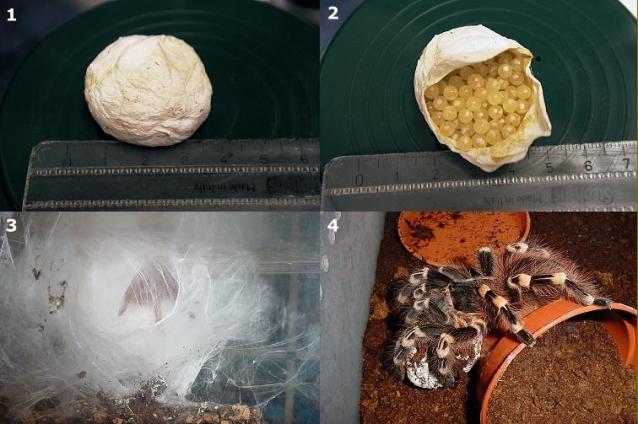 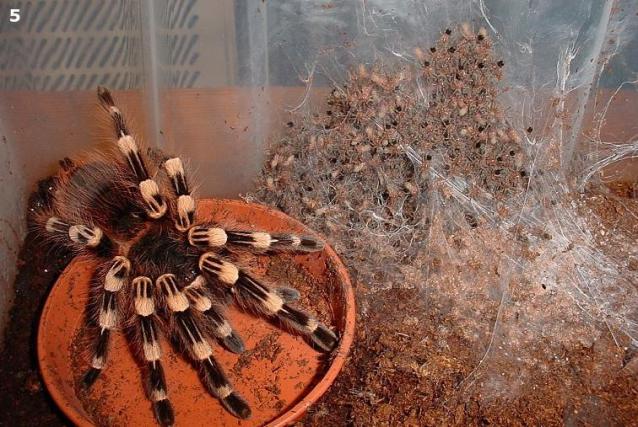 Two types of eggsacs are produced depending on the species.
1. Normal or 'mobile' eggsac. This type of eggsac can be moved around by the female and during incubation, she rarely leaves it unattended.
2. Infertile P. irminia eggsac opened to show the eggs inside.
3. Example of a 'fixed' eggsac of P. murinus (rcf). During incubation the female guards the eggsac constantly. This type of eggsac is suspended in a large hammock-like web and cannot be moved around.
4. A. geniculata guarding her eggsac.
5. A. geniculata spiderlings emerging from the eggsac. 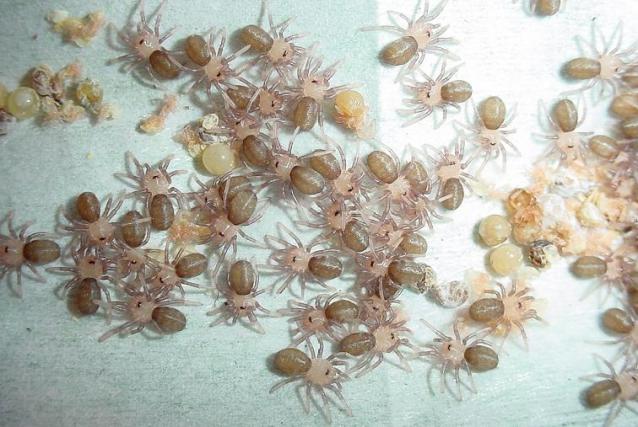 Newly emerged P. irminia nymphs. After a few days the nymphs will turn dark and go through their first moult to become fully mobile spiderlings. A few infertile eggs can be seen in this photo.