At various stages in a spiders development it must, in order to grow, go through several moults in its lifetime. Moulting (or ecdysis) is the process by which the tarantula sheds its old exoskeleton (skin) and emerges in a new, larger one. Spiderlings can be expected to moult five or six times in their first year with the pre-moult (apolysis) period increasing until reaching maturity. Generally speaking, arboreal species moult more frequently than terrestrial and have a shorter life span. Before your spider moults it will go through several physical changes; firstly feeding will almost certainly cease (in some adults this can be as much as three months before moulting); if the tarantula has a bald patch, this will turn to dark blue / black. The spider will become sluggish and movement reduced to a minimum. Species with urticating hair may spread these hairs around the container walls and it may drink more water than usual. The area above the chelicerae (jaws) will have become swollen and one of the final signs is the spinning of a thick silken moulting mat.

Once these criteria have been observed, you must remove any live food (crickets will certainly attack a helpless moulting tarantula) and spray the container because if the surrounding air is too dry, then the spider may get stuck in its old skin and die. If your tarantula moults beside its water dish then the air humidity is definitely too low.

When the spider reaches the point of ecdysis it will become restless and add more and more silk to its moulting pad. Tarantulas can moult sitting upright but usually they will moult lying on their backs and once in this position, they must not be disturbed. A dying or dead tarantula almost always remains in a sitting position with all the legs curled under the body. The spider will remain on its back for a varying amount of time (from a few minutes in spiderlings and juveniles to several hours in adults) and the only movement will be a periodic moving of the chelicerae and legs. Eventually the area around the carapace and along the abdomen will split and by this time all of the legs will be moving constantly. Slowly but surely the legs will be pulled free and the old skin pushed to one side. After moulting the spider will remain on its back for some time  while resting but it will turn over when ready. The cast skin can be removed after the spider is well recovered and this can be used as a sex-determination tool (see chapter on Breeding). A moult should take no longer than 12 hours and after this time the tarantula is usually in need of help. The most common problem is that the old skin doesn't come away properly and this should be removed very carefully using a damp paint brush. If the spider experiences difficulty during a moult, it can be sprayed with tepid water and hopefully this will soften the skin enough for it to free itself. It is advisable to stay and watch the tarantula that is moulting just in case it should have a problem but, if the conditions are correct, the chance of any serious damage will be slight. If the spider has lost all or part of any of its appendages, it will be regenerated after a moult. Spiderlings and juveniles regain lost limbs much faster than adults and the new leg will be smaller yet perfectly formed. After a succession of moults the leg will continue to grow until it reaches normal size again. Tarantulas will sometimes eat the soft abdomen part of the cast skin but it is not essential to their survival but it will need a good drink to regain the large amount of moisture that has been lost. The spider will fast for a time after moulting for the fangs are too soft to capture prey (this period will lengthen for older specimens d may last for anything up to two weeks). On reaching maturity, a tarantula will moult annually and feeding rates will also decrease. A video clip of a tarantula moulting can be found here. 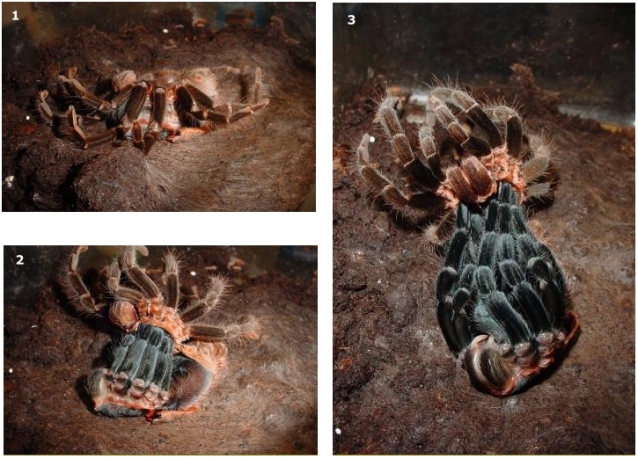 1. The moult begins when the skin splits. 2. Slowly the legs are withdrawn.

3. Eventually all the legs are removed.